August proved to be a very volatile month for equities. The S&P 500 was up by over 4 by the middle of August but then ended the month down over 4%. However, there were some stock markets that performed well with China, Australia, Japan, India and Brazil all growing. Brazil rose 6.17% in August.

The US dollar continued to strengthen, and this helped our portfolios as we have a significant amount invested in the US. As Sterling falls against the dollar, the value of our dollar denominated investments goes up when converted back to Sterling. The S&P 500 fell 4.08% but rose 0.32% in sterling terms due to the effects of currency movements.

After a bounce in July, UK Gilts extended their decline falling by 6.8%. They are now down 20.55% over the year. Despite UK Gilts being classified as a low risk investment, they are currently behaving as a high risk investment.

Consumer price inflation has reached 9.3% and some commentators are forecasting that we could experience inflation at 18%. When CPI was 9.3% and rising in 1979 the Bank rate was 14% and mortgage rates were around 12.5%. The Bank of England is expected to increase interest rates from the current 1.75% to as high as 4% in 2023. This is still much lower than in 1979.

The US economy is doing much better as it is broadly self sufficient in gas, so gas prices there are much lower. Inflation in the US dropped from 9.1% to 8.5% in July. It is important to note that what happens in the UK does not affect our investments as much as what happens in the US and elsewhere. The unemployment rate in the US (like in the UK) is very low and not rising as you would expect it would as you enter a recessionary period. Perhaps if unemployment rises a bit, then this would mean that inflation would come down quicker, interest rates wouldn’t rise as much, and stock markets would move higher – bad news is good news.

UK equities fell below trend and Japanese and Global equities moved above trend.

Academic research has shown that if you follow a systematic method for investing, you will significantly outperform against the benchmark. For example, research by the Cass Business School has shown that if you combine a number of “Smart Equity” ETFs in the US market you can beat the S&P500 by at least 1.5% per annum. Our Retirement Investment Solution 2, 3, 4 and 5 portfolios combine Trend Following with “Smart Equity” exposure and invest in three ETFs from iShares which use “Momentum”, Quality” and “Volatility” in an attempt to outperform. This month saw momentum and volatility outperform. 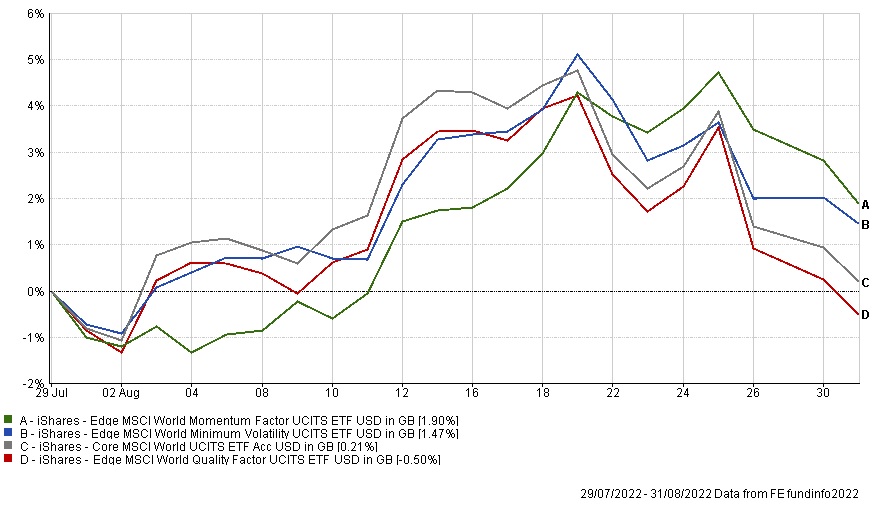 We are faced with an extremely volatile period for most asset classes, even the lower risk ones such as bonds. How high interest rates will peak is affecting all asset classes and with each piece of economic news, the expectation will change. The best scenario is that we experience some slightly bad economic news that sees unemployment go up slightly and economic growth reduce with talk about a mild recession. This would mean that central banks will not have to raise interest rates as high, as inflation will naturally fall Lower interest rates should mean that bonds will do well, and equities will be supported, especially those markets that produce higher than average levels of dividend income.

We experienced much volatility in almost every asset class in August as we are experiencing much uncertainty in inflation and how high interest rates will have to go to fight it. Bonds are being the most affected and, despite being classified as low risk investments, they are producing the highest negative returns now. Sterling remains in a downtrend against the dollar as the weight of energy prices, interest rates and inflation are hitting consumer spending and contributing to negative sentiment. We must remember that a falling pound acts as a tailwind for our portfolios. In addition, how the US economy performs affects global stock markets significantly more than anything that happens in the UK.